It was an ordinary day for Grant Connolly, 23, a University of Windsor student on his way to cast an advanced ballot in the 2021 federal election.

Accompanied by his family, Connolly said he was excited to cast his vote in Belle River, Ont. knowing he was completing his civic duty as a Canadian citizen.

“I felt like I am exercising my right as a Canadian citizen,” said Connolly. “The fact that we live in a country that my vote can be heard … every vote matters and every vote counts.”

An issue which really pushed Connolly to the polls is the Federal government’s commitment to providing Indigenous communities in Canada access to clean drinking water.

On Monday, after millions of Canadians like Connolly cast their ballots, the Liberal Party of Canada led by Prime Minister Justin Trudeau was elected to a third term in Federal office. This marks approximately 2,149 days since they took over for the Conservatives, in 2015.

Despite these two elections being so close together, it doesn’t seem as though the student population cares who runs the country. According to Elections Canada, throughout the course of those past 2,149 days there has been a decrease in voter turnout among a the 18-24 year old demographic.

To some degree, Connolly says young voters may not be flocking to the polls in large numbers due to voter trends and tendencies from the millennial and boomer generations. He notes that older voters are more affiliated with the party, rather than the leader and their respective platform.

“ I feel like another big issue is how disingenuous politics is as a whole,” said Connolly. “How do you feel your vote is going to make a difference when you have people who are going to vote blindly.”

A student at the University of Windsor, Anna Denys, 26, used the advanced voting method in Chatham, Ont.

Denys, says she has cast a ballot for every Federal election since she was first eligible in 2015.

“In my family, we were always taught (voting) is the most important thing you can do, and that was reinforced through my education as well,” said Denys.

Denys says she makes a conscious effort to read all of the parties platforms before making a decision on who to vote for. In this year’s election, providing Indigenous communities with clean drinking water, and following through on promises to gender equity and LGBTQ+2IA rights were among the highest priorities to Denys.

Denys says she is aware of the Elections Canada statistics, and notes contributing factors like active voter suppression, and a lack of education on this rushed election as to why percentage points are down significantly.

“Elections Canada wasn’t on campus for this election and that was how I voted (in 2019),” said Denys. “Logistically it was difficult, there was a pandemic, you hear people saying ‘well I was in Toronto and waited three hours to vote’ .. and if you think that your vote doesn’t matter than I can see why people wouldn’t want to risk getting sick.”

The impact of memes and their ability to persuade young voters 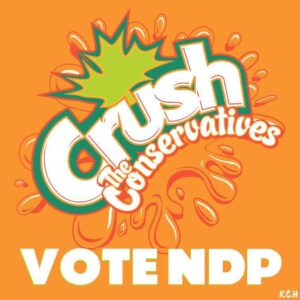 Though political involvement at the polls seems to be dwindling every election year with students aged 18-24, there has been an increase in young people getting involved by sharing politically charged memes around social media.

University of Windsor sessional lecturer Dr. Garth Rennie notes that these memes were created with a representational system in place, aimed toward persuading young voters.

“It is a contested field,” said Rennie. “Understanding the construction of the meme and its linguistics will facilitate the process of coming to understand and situate (the meme) in a purposeful context.”

One of the more crucial elements of the meme is its ability to re-create a certain image, and use its familiarity to connect with viewers in a system called mimesis, said Rennie.

“ In visual theory typically there are three different types of images,” said Rennie. “The aspiration of the meme seems to be creating an iconic image.”

Though it is unclear on what the implications of these memes mean for how young people will lean to vote in future elections, Dr. Rennie says the positive side of these memes are that they are elevating farce within the young generation.

“Farce, satire, irony … I believe to be, ultimately the most important and effective form of meme constitution and persuasion,” said Rennie. “The meme is very sophisticated com positional system illicit laughter.”

Dr. Rennie says for youth in particular to be engaged in farce is fabulous, but the attribution of violence and putting people in cross-hairs due to farce can be dangerous for the evolution of these political memes.