Standing on a New Stage: What the Windsor Indie Music Scene Can Expect as Capacity Limits Lift

With capacity limits and proof of vaccination requirements lifting across the province, music venues will finally get a much-needed boost of something other than a vaccine.

Under Provincial guidelines, entertainment venues across Ontario including music venues like Caesars Arena, Villans, The Phog lounge and The Meteor will finally be able to book live acts at full capacity again. As dozens of moving pieces within the industry now shift into gear, downtown Windsor  ready to open their doors for the flood of anxious

One of the integral pieces to the reopening of the local music scene is Shawn Vandenberg- the owner of Windsor based promotion company, Happy Little Crowds. While Windsor may not historically be known as a big stop for shows, the Detroit-Windsor border offers a chance for the keen eye of Vandenberg to scoop up bands who may be passing through.

“I look for touring bands and artists that might be going through the area, who may have otherwise chosen to play in Detroit,” he says. “I’ve built up relationships with agencies that lead to them approaching me often to see if I’d like to have ‘so and so’ play.”

It’s not hard to see that the passion Shawn devotes goes deeper than logistics and into creating long-term interpersonal connection.

“…A lot of my work is in trying to find new artists to bring to town. I have artists come from the UK, Australia, USA, and of course from all over Canada. One of my favourite things about what I do is giving some of our local artists the chance to open a show for some of their favourite artists. Just last week I had a local band reach out to me to see if they could open for a band I have coming to town because it happens to be their favourite band. That’s definitely one of my favourite parts about concentrating on the touring scene.

The long, heavy toll of closures

The last 18 months of the pandemic have shown no leniency in heavy handed closures for musicians and touring bands. From waves of Covid, whiplashes of openings and closures (closing and reopening once again), to capacity restrictions, its all taken a toll on the threads of the tightknit music community

“It’s been trying. We’ve had a lot of ups and downs to accept and work with. Right when it seemed like everything was coming back, we had to accept that we were pausing again. It’s lead to some rescheduling of shows, and unfortunately some cancellations” Shawn adds.  “You can almost watch in real time your emails slow right down the moment a new wave is announced, or a new variant is discovered.”

Even now, there remains a certain sense of hesitancy when it comes to booking shows, but Shawn remarks on the heightened fears of artists rather than concertgoers themselves.

“It stems from not wanting to get excited for a tour only to have to reschedule it, or even worse, cancel it.” Shawn is not immune to doubt, these emotions extend to himself as well

The Phog lounge and Meteor have seen a rife of cancellations over the last year; nevertheless, the venues put their hands together in creative ways to keep business rolling. Around the start of January, the Phog lounge and the Meteor teamed up to put on the Gravy Train: home delivery of live music, local craft beer and local eats, in an attempt to continue to serve music to the community despite closures. The forced pause of COVID has brought Shawn a new appreciation of the work and his scene.

“It’s led me to realize how much I love doing this and how much our city loves it. The support we’ve given each other to get through this has been like no other.”

For many students, being part of the music scene is an important part of their time at university. The sense of community and an outlet amidst the endless studying is crucial and is why Shawn emphasizes the necessity of the evolving scene.

Creating a sense of community

“When I was growing up, during my high school and college days, music is what kept me alive. It gave me the chance to escape and free my mind. Other times it gave me the ability to tune everything else out and focus on healing my own issues. Music has very much kept me alive, and I’m sure several other people can relate to that side of it. Art in whatever form is very healing.”

He continued by drawing back to the present day where live music provides the chance to get together with friends and/or strangers and just be. The lifespan of concerts breaths a new life, full of emotions to get lost in, and a closeness hemmed together by chords sung in tunes. This support is something students can look forward to continuing over the next semester and onward as there are a lot of exciting ways students and members of the community alike can get involved in the Windsor indie music scene.

“One of the best ways [students] can support is by letting us know who they’d like to see. I think being interactive is key. It helps people to feel involved and that they’re a part of a community. So, the best thing I can say is, if you like music and if you like live music, try to be around as much of it as you can.”

“I think the shows we have coming out of this omicron wave are just as quality, if not even better. I have Crywank coming from the UK on March 23 at Meteor with an artist called Commuted. I have Yoo Doo Right from Montreal playing Meteor on April 2nd…I also have a band who is a side project from the Flaming Lips coming up…I have to be quiet about those details for now. One of the coolest shows I have coming up is a band called Eyelids. They are an indie supergroup consisting of members from some of my favourite bands (Guided By Voices, Camper Van Beethoven, Stephen Malkmus, The Decemberists, Elliot Smith Bands) – that one is at Meteor June 19th. There are a BUNCH of shows that are just waiting to be announced.”

To stay up to date with bands and acts coming to town, you can follow Happy Little Crowd Productions on Instagram and Facebook @happylittlecrowd and on Twitter @CrowdLittle as well as the music venues Villains, Phog Lounge and Meteor. All three have open mic nights and frequent concerts that allow you to become not only a part of the Windsor family, but, as Shawn said best, “the future of music” as well. 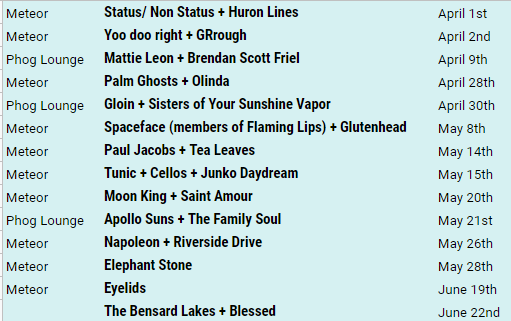 Weadee is a Political Science major with French Specialization and a minor in Communications. She loves art, music and singing for her plants. When she's not on the track doing long jump or at CJAM hosting her radio show, she can be found in bed curled up with a good book.
Page load link
Go to Top