Plan of Action: Dealing with the safety concerns on campus

The University of Windsor witnessed several safety concerns on campus after two students were reportedly followed to their cars late at night in October. It happened on consecutive days, late at night.

According to the official report released by the UWSA on Tuesday, 4th October, the first incident happened on Monday, around 11 pm, after which it was reported to the campus police.

“There was a female on campus that a hooded man unfortunately chased to her car, and this incident happened twice,” stated Alanna, the current UWSA president.

The public statement made by the director of campus police, Matthew D’asti confirmed that a similar incident happened the very next day, around 11 pm, where a stranger followed a student to their car.
“The incident and individual are similar to what was described in another complaint filed earlier this week, so we are reminding students, faculty, staff, and visitors to campus to use the enhanced safety protocols the University has in place,” said D’Asti in his public statement addressing this issue.

After two weeks, a shocking report was released by the Campus Police informing about a sexual assault near the university campus. A university student got sexually assaulted by a man who chased and groped her. The complaint was filed, and the description of the man was released. There were speculations that this person was the same man responsible for the previous incidents.

“I am glad to report that this was the same man who was responsible for the previous instances and is now caught,” confirmed Alanna in an interview with us. 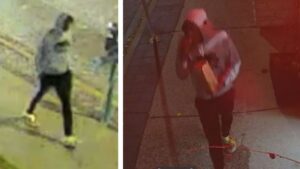 The person was caught on the CCTV footage, and the police released a notice requesting help from the people of Windsor to identify and help find the suspect.

On October 28th, the campus police released information confirming that the suspect got arrested.
All the incidents that occurred in October were terrifying and stressful for both, the students and the authorities of the university. The university’s safety measures were questioned, and the campus police had to deal with its consequences.

“I am scared to attend my evening classes as they end at 10:00 pm, and I have to walk alone to my place,” says Olivia, a student at the university.

“It is a tragedy that young women do not feel safe on this campus and students who fear to walk alone at night,” says Dr. Scolnic, women’s and gender studies professor. 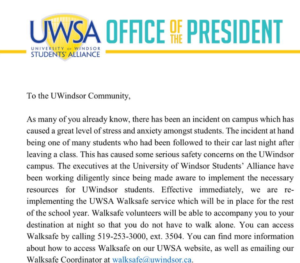 “Effective immediately, we are re-implementing the UWSA Walksafe services whicH will be in place for the rest of the school year,” stated the UWSA Executive Team in their official announcement made on 4th October, on Instagram.

The comment section of this post was filled with furious students expressing issues and concerns they are facing after the ongoing situation.

Alanna mentioned that UWSA was made aware of the incidents through Facebook. “When we saw the traction through social media, we were quick to implement few safety measures to deal with this certain situation,” claimed Alanna.

These are the resources that the president of UWSA, Alanna, has mentioned that must be used whenever a student is facing an emergency situation.

Walksafe is a UWSA initiative that allows students to call a Walksafe volunteer to walk them safely to their destination. “Our number one priority was to start Walksafe, but we have been facing difficulty to find volunteers,” said Alanna.

The hours of operation, as mentioned in this post and on the official website of Walksafe are Monday to Friday, 7:30 pm to 11:30 pm. Students are questioning the hours of operation of Walksafe. But, the lack of volunteers makes it difficult to operate late at night. But, looking at the ongoing situation, the executives of the UWSA took it upon themselves to volunteer for Walksafe for the whole week, alongside handling their busy schedules.

Alanna mentioned how for the first time, Walksafe is now available on the downtown campus too, and not just restricted to the University. Katherine Jago, the coordinator for Walksafe has been working closely with the UWSA to make this initiative possible and running.

Every university student is requested to have the Safe Lancer App on their phone. It has a lot of resources to help in times of crisis.

This feature allows the students to share their live location with the campus police. Campus police are able to monitor a student’s progress and destination. If you require assistance, just click on the “Emergency” button to alert the police. Once you reach your destination, tap “Finish Tracking.”

This app is helpful for letting your friends know your real-time location instead of requesting them to walk with you. You may pick any contact and start sharing your location. In case your friend gets disconnected, there is an emergency button that pops up.

This is an emergency trigger to alert the police while simultaneously connecting to them through a call. This will help them know your live location. 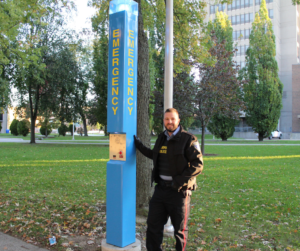 Currently, there are 270 emergency call boxes across campus, including the downtown campus. These have two-way speakers that are programmed to dial the campus police directly. A button is pressed which operates 24/7 all around the year. This also alerts the neighboring people by emitting a flashing blue light on it. 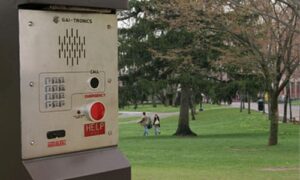 When a person presses the red emergency button, Campus Police are notified and the individual who pushed the button can remain in direct verbal contact with the telecommunicator until police arrive. 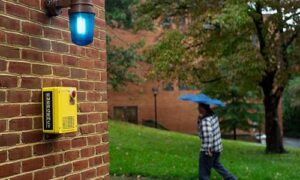 The Emergency Call Box is in operational mode 24/7 with Campus Police response.

Another resource mentioned by Dr.Scolnic is the “Bystander Initiative” which works on making the campus a more comfortable and secure place for students. “Anyone may register for a bystander workshop through MySucess and learn how to prevent sexual violence of any sort,” stated Dr.Scolnic. 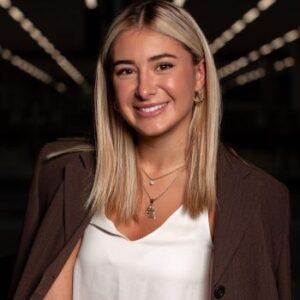 “I, as a president of UWSA, work on providing comfortable and proper services to any student in need to ensure they are mentally and physically okay. We help connect them not only to the counseling and peer support resources but with the Campus Police too. We are one big happy family and no such incidents are to occur with anyone,” stated Alanna.

“The UWSA is currently working on making a video for all the students on safety guide that will introduce them to all the resources alongside how to use them in times of emergency,” Alanna mentioned.

Life is meaningful when your work can be valuable to others and yourself, so make the most of it!
Page load link
Go to Top